skip to main | skip to sidebar

Egos and Elected Officials....Extreme to say the least

Here in North Carolina, there are two kinds of people...regular folk and elected officals. It's been pretty rough being an elected official in this state in recent years, with corruption lurking around corners and hiding in bathroom stalls at various waffle establishments in the capital city. There is a culture here that I've not experienced in over twenty years of being a journalist. A culture that those with a bit of "power" believe the can operate outside the law, at the very least bending it and often breaking it. This goes on from local police and sheriff's offices, all the way up to state level elected officials. I'm getting used to it now, but when I first arrived a few years ago it was eyeopening. I was shocked when I informed a local Sheriff that his policy of withholding incident locations was clearly a violation of North Carolina public records law. His response was what shocked me..."I don't care...I'm not going to have that information released." The top law enforcement agent in the county doesn't care that HE'S violating the law. I've seen reporters and photographers threatened

with arrest for doing their jobs legally and within all ethical guidelines those in our line of work adhere. When I spoke to the Deputy Chief of the department in question, I was greeted with a statement I didn't expect. "We only release the information we want...no matter what YOU PEOPLE think you should have..." Hey Deputy Chief moron, it's not what 'we people' think, it is what the frickin' law says. Maybe you should read it!
Posted by Mr Stew's Blog at 11:32 PM 18 comments:

Photo from the News and Observer in Raleigh Winn-Dixie supermarket (so it's huge), and there is NO SPACE for media. I haven't seen that much fire equipment since an apparatus convention. It was quite a site. Anyway, they decided to stick us in Dixie-Belle Bar-B-Q's parking lot (something the owner didn't really appreciate all that much later in the morning!). So I set up the livetruck again, and had one of our reporters take my credit card to BoJangles for a little breakfast and coffee for the crew. I don't really like BoJangles all that much, but it was really good to put something in my stomach at that point. My phone rang and it was our special projects producer. She told me she was coming to the scene to relieve me...so I could go home and get some sleep. I reminded her I was a man without a home for the forseeable future and really didn't have anywhere to go, so I'd rather just stay and work (which is what I did). At our next briefing, the Mayor informed us the methods used during the morning did not put out the fire...and that it would be at least another 12 hours before the fire was out. So I called my wife and told her she'd be best to head to her brothers in South Carolina with the boys and girl...and her sister. I continued to work the command post for a few more hours, then headed to the station to finish out the day. Sometime around 9pm, I managed to find a nice parking lot near my subdivision where I could make a short trip through the woods and get to a street a long way from my house...I walked about a mile or so and finally made it to the house around 9:30. It was an interesting walk...a lot of lights were on, but there was no indication anyone was home. I got into the house and let the dogs out...I continued to work the phones overnight and thru the morning on Saturday. I got a few hours sleep, but not much. Early Saturday morning, they opened the streets and let folks come home. By noon, you would have never known there had been an evacuation.
Posted by Mr Stew's Blog at 10:42 PM 1 comment:

WTF is up with the Middle East?

Peace in the Middle East is not possible…not now…and maybe not ever.
Why would I say such a horrible thing?

“I offer myself as a sacrifice to God and to the homeland”.

chunks in the area north of Gaza. She was a 57 year old grandmother named Fatma Najar. And her family is proud of what she did. "I am very proud of what she did. Allahu Akbar (God is greatest)," one of her sons, Fuad, 31, told Reuters. She was the mother of 9 and grandmother to 30 children. I can only imagine what her children and grandchildren are thinking and believing now. I wonder if grandma got any virgins when she reached paradise? Just sayin….


Between crazy-ass grandma and the absolute insanity we’re now seeing in Baghdad, I don’t see how it’s ever going to get better. You may remember we had a civil war here…and you may have seen the Civil War ‘re-enactors’ do their presentations. It was guys in blue vs. guys in grey. You could tell who was fighting for who… In the middle east, few are in uniform. Yesterday, more than 200 Shiites, most of them just minding their own business going about their daily do, were blown up. Today, they took revenge on the Sunnis by going to area mosques and killing 19 people. They burned four mosques down today…remember, we made sure to NOT damage the mosques for fear of upsetting the Muslim world, but they do it and it’s ok. Six of today’s victims were doused in kerosene and burned alive on the street. Lemme say that again….

BURNED ALIVE IN THE STREET. 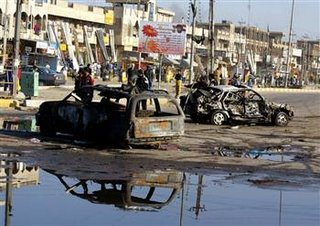 Pretty soon, Iran will have 'the bomb'. Isreal already has 'the bomb'. India and Pakistan already have 'the bomb'. If we just mind our own business for about the next 10 years, they'll all blow each other back to Allah...if we're smart, we'll just sell everyone over there weapons and make a whole lot of money in the process.

Both the Shiite’s and the Sunni’s are insane. They have no stated cause. They want American troops out (we’d like to leave, but y’all won’t stop killin’ each other), so they blow up fellow Iraqis. Because they’re different …

I recently received a treat in the mail…the folks at Belkin sent me one of their newest N1 Wireless Routers to test. I really enjoyed their previous Pre-N router…it was easy to install and rock solid in it’s performance, the thing almost NEVER needed to be reset. I almost didn’t want to replace my existing router since it was so reliable. But I knew I had to give the new stuff a try. So I set a clock and disconnected the Pre-N router and plugged in the N1 Wireless Router, popped in the software CD-ROM and ran the set up program. Total time to get the new router up was less than FIVE minutes. And it worked great! Previous speeds around the house to my laptop were a consistant 100 mbps or better, now I’m clocking 300 mbps with no drop outs. I knew the system was strong, but I didn’t know how strong until my neighbor who lives down the street…SEVEN houses down the street, asked me if I recently added a wireless network to my home. He didn’t see the Pre-N router on his computer, but the new N1 router he saw right away. One of the nicest things about the N1 is the display panel. It leaves little doubt about what the equipment’s status …if the display is blue, it’s all good. Any problem and the display turns auburn…

In a nutshell, this thing is really good. It gives reliable service and it’s very fast. Belkin includes Wi-Fi Protected Access (WPA) for enhanced encryption protection, as well as “Stateful Packet Inspection (SPI) and Network Address Translation to “double your firewall and safeguard your network from Internet intruders.” Whatever that means.

Belkin’s on-line price is $149.00…shop around and you might find it for less…

Here’s a link to the Belkin catalog page… http://catalog.belkin.com/IWCatProductPage.process?Product_Id=273526
Posted by Mr Stew's Blog at 10:54 PM No comments: